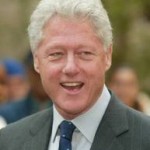 Bill Clinton 42nd U.S. President (1946- )
William Jefferson Clinton was inspired to enter politics when, as a delegate to Boy’s Nation, he met John F. Kennedy. Born in Arkansas, he served several terms as governor there before twice being elected president of the United States in 1993 and 1997. His focus during his presidency was to boost the standard of living for low- and middle-income families, reduce the deficit, create a trade agreement with Mexico, and to control the purchase of guns. Bill Clinton probably survived more scandals than any other American leader over the course of his administration. 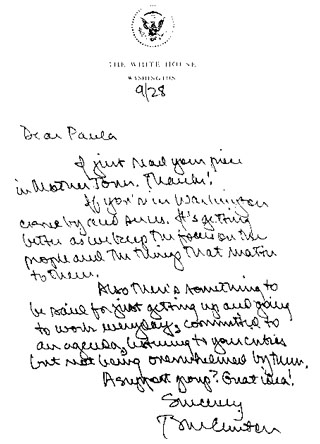 Bill Clinton Personality overview according to the handwriting analysis report
Bill Clinton’s handwriting is a mixture of curves and angles: the angles give strength to the curves and the curves soften the angles. Thus, he is an emotional person who feels things deeply, someone who will go to some lengths to create a consensus. Yet, when he strongly believes in something he has the capacity to stand firm in his viewpoint. The overall picture of space is compact, indicating a strong need for social contact and genuine caring for the welfare of others.

Bill Clinton Relationships
Rounded writing is generally seen as a more feminine quality. When it appears in a man’s script it is interpreted as emotional softness, an indicator of one whose heart is easily touched. It can be seen that Clinton both laughs and cries easily and is not ashamed to show his feelings. Another aspect of the round forms exemplified by this handwriting sample is a need for physical contact. He is someone who touches others frequently, and enjoys hugging and holding them close. Triangles in the lower zone hint at subconscious aggression toward women, but since the angles are not sharp in this case, this aggression is expressed indirectly.

Bill Clinton Intellectual forces
The upper zone is not well developed, which certainly does not point to a lack of intellect in this case. Instead it shows that Clinton has a greater interest in concrete, day-to-day activities and the application of ideas, rather than in spending a lot of time philosophizing.

Bill Clinton Physical drives
The middle and lower zones are accentuated at the expense of the upper zone, revealing an active person who feels compelled to get involved in whatever is going on around him. The crowded nature of the spatial arrangement tells us that Clinton wants to cram as much as possible into each day. The lower zone returns to the baseline, so he usually completes what he starts.

Bill Clinton Motivating forces
Clinton’s predominantly rounded writing style suggests that his most important motivation is the need to help and serve others. Failing in this would leave him feeling useless and miserable. He needs to know that he has made a difference. The capital B in his signature, which is larger than his surname initial, demonstrates a desire for others to think of him as “Bill,” more than “Mr. Clinton.”