Andrew Carnegie was born into a working-class family in Scotland and after the family emigrated to the United States in 1848, went to work in a textile mill as a bobbin boy Here, his excellent penmanship soon earned him a promotion to a clerical position and later to a post at the Pennsylvania Railroad. During this time he undertook a number of shrewd investments, and went on to lead the expansion of the American steel industry, eventually becoming known as the richest man in the world. One of the most respected philanthropists of the time, he died August 11, 1919. 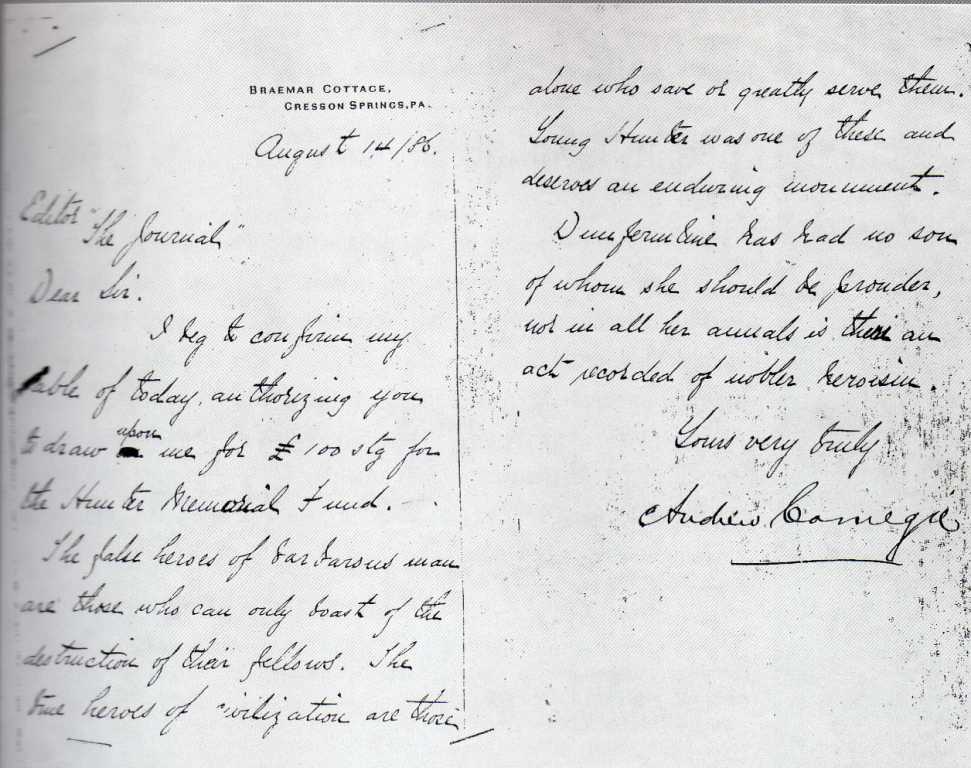 Andrew Carnegie Personality overview according to the handwriting analysis report

A strong characteristic of Carnegie’s handwriting is its high degree of regularity, indicating the development of self-discipline. He maintained consistent size in the height and width of the middle zone, which takes concentration and an ability to regulate the movement. A very strong right slant in many upstrokes points to a person of swift emotional responses, but the regularity of movement indicates the control needed for him to think twice before acting.

Andrew Carnegie Relationships
The upper zone is disproportionately tall in relation to the middle zone, revealing a strong sense of responsibility within a rather authoritarian personality. In other words, Carnegie was better at giving orders than taking them. The combination of strong angles and deep garlands show someone who could be firm but caring. The angles lend strength to the garlands, but the garlands soften the angles.

Andrew Carnegie Intellectual forces
Carnegie was willing to explore a variety of new concepts and ideas and the upper-zone emphasis shows he put energy into philosophical thought. The movement reaches upward as if seeking answers, and is often seen in the handwriting of very religious people. The smooth breaks within words suggest that he was open to his intuition and might have been willing, occasionally, to go with his instincts. Yet the sharpness of the strokes make the writing seem chiseled, or in relief, a feature of a judgmental person who sees things in black or white.

Andrew Carnegie Physical drives
The pressure appears to be fairly light, suggesting that Carnegie’s willpower might have been stronger than his stamina. He could get things done by directing others, as seen in the long f-bars, lack of margins, and the inexor¬able rightward movement of the sample.

Andrew Carnegie Motivating forces
Carnegie was motivated by pride in his accomplishments, as evidenced by the large capitals and tall upper-zone letters. His signature is clear and similar to the body of writing. This shows a direct, candid character whose self-confidence and assertiveness brought him success. The pleasing arrangement of space indicates the ability to keep a clear perspective in order to make practical judgments and decisions.