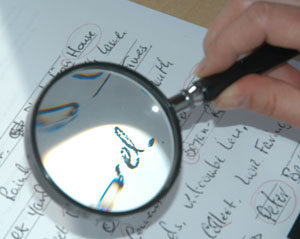 Section 3 of the Indian Evidence Act (1) of 1872 defines a document as under:—
‘Document’ means any matter expressed or described upon any substance by means of letters, figures or marks or by more than one of those means, intended to be used, or which may be used, for purpose of recording that matter.”

“The term ‘document’ as such is very extensive and wide covering writing in ink, pencil or with any material on any material including a paper, inscription/engraving on a metal plate, stone slab or any other material, typewritten, cyclostyled, printed, lithographed, photographed matter, chart map, plan etc. etc.”

2. What Is a questioned Document?

When a question is raised about the authenticity of a document or a part thereof, that document becomes a questioned document, which is some times also referred to as a ‘disputed’ or ‘Contested’ document.

The authenticity of a document or a part thereof may be challenged on a number of grounds.
3. Documents questioned on the ground of authenticity of signature or thumb impression.

The documents challenged with regard to authenticity of the signature thumb impression of the executant(s) or that of the attesting witness(es) constitute the largest number in questioned documents. When the executant is required to admit or to deny the signature or thumb impression on a document in dispute he generally denies his signature on the document by thinking that if the signatures are admitted, the contents of the document will be proved which may go against him. So much so that in some cases, the executant may claim that he does not know the script in which the signaturtes under dispute are made or that he is an illiterate person. However, it is not uncommon when documents are prepared under forged signature with a view to cheat others by claiming benefits thereunder from those whose signatures are forged and/or others.

A good number of documents become subject-matter of litigation in which a clever forger prepares documents by using signatures obtained on blank paper by trickery or by using the available blank space above the signatures on some other documents and tearing off the portion containing previous writings. Cases have also been reported where the original writing has been erased physically or chemically and the document has been re-written/typed on the erased surface or cases when documents have been prepared by transplanting signatures on the document from some other document. On the other hand, genuine documents at times are also denied by executant(s) on the ground that signatures are genuine but the writing of the document has been written later on.

5. Documents questioned on the basis of alleged alterations.

The documents are also some times challenged on the basis of chronological order of the entries, identity of pen and ink, alteration in amount, obliterations, sequence of writing or typewriting with folds of paper i. e. whether the paper was folded before or after the writings.

Sometimes, the photo copies and carbon copies of documents are challenged by alleging that these are not the true reproduction of the originals or that some alterations have been made in photocopy by addition or deletion of some portion(s) of writings during photo copying. Cases are on record where photo copies have been altered by transplanting signatures or by removing vital portion(s) of original document by simply rubbing off their electrostatic image on photo plate at the time of preparing photo copy on manual photocopying machine. This type of cases are, however, not very common.

The document examiner often, has to handle anonymous letters written to perpetrate a foolish practical joke, for blackmailing, and/or threatening due to writer’s disturbed sex condition, love failure, family rivalry, religious or political prejudice etc. The document examiner is asked to determine the authorship of such anonymous letters by comparing the writing therein with writings of suspect(s). As in most of the anonymous letters, the writings are generally disguised, there is need for the examiner to be very careful in arriving at an opinion. The other type of letters, whose authorship a document examiner may be asked to determine consists of love letters, suicide notes and the letters written in routine business but subsequently denied by the author with a view to avoid humiliation, social and legal consequences.

8. Documents challenged on the basis of date of execution/Age

This class of documents includes those documents, in which the age of document or a part of document or the chronological order of different parts of document are questioned. The common enquiry regarding such questioned document is ‘whether the document is actually as old as the date thereon indicates or whether the document is not older than it purports to be?  Cases of back dating of documents are not uncommon. Documents have often been proved to be unreliable because they bore dates, a number of years prior to the date or year when the paper on which they had been written or the instrument with which they were written and/or the ink/typewriter used in their writing/typing was manufactured or marketed by the manufacturer. The documents have also been declared forged and untenable on the basis of different sequences of strokes in writings thereon and also on the basis of the revenue stamps.

A revenue stamp bears secret marks and every year some change is made in the marks. Record of the change is kept by Indian Security Press, Nasik Road which prints the stamps. The date of printing and the date of issue of a revenue stamp can be ascertained from the press by sending the stamp to them through proper channel.

In this class of questioned document, the examiner has to carefully and minutely examine the typewritten matter to determine the make, model of the typewriter used in the questioned writing, to link the typewriting with particular type machine, to verify the alleged date of typing from wear and tear marks and other factors to determine if there is any fradulent alteration in the original typed matter.

In the past few decades, science has developed tremendously and most of these types of manipulations can be detected with certainty.